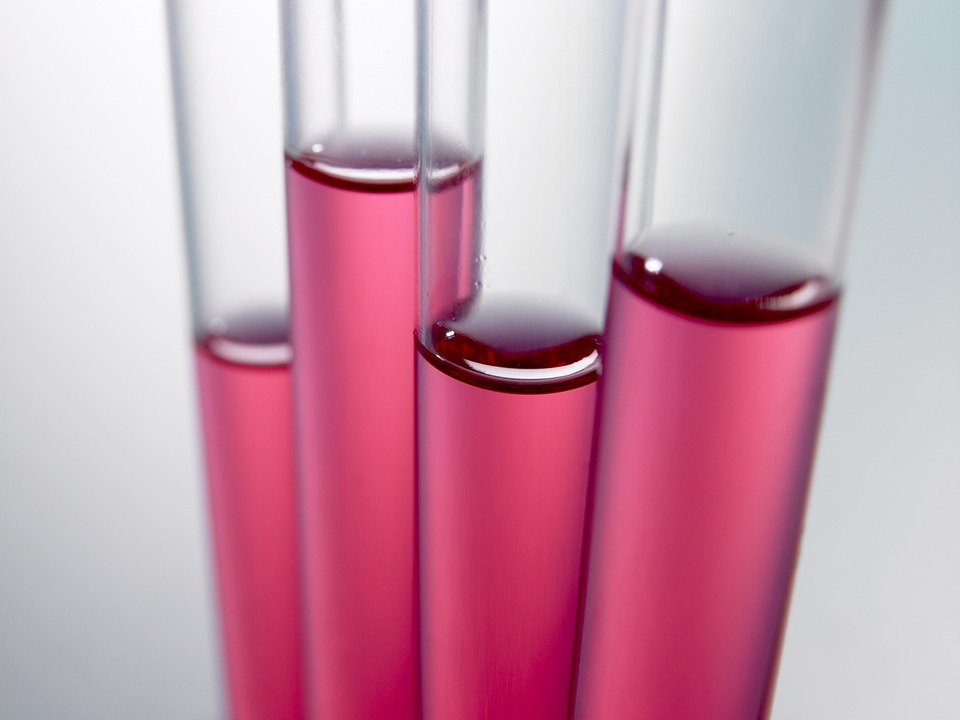 pH measurements have become an analytical tool with many applications today, from the treatment of water in acidified rivers or lakes due to acid rain, due to environmental pollution, to the control of food and cosmetics that require a specific pH. Buffer solutions are capable of opposing pH change when small amounts of strong acids or bases are added; a mechanism of great importance in nature, which in the case of humans, is capable of keeping blood at a stable pH of 7.4. Experimental studies were carried out on techniques to measure pH in an appropriate and as accurate a way as possible, using paper mark indicators and some indicators to limit the pH value of different solutions of HCl, buffer solutions with different concentrations of HCl, and several come out, some of them confirming the hydrolysis of their ions. The general context of this post is to determine the pH of different solutions, using a pH-indicator paper, and using the dimensioning technique with indicators, in order to understand the whole theoretical basis that involves the measurement and calculation of such an important concept.

It can be said that an acid is any substance that is capable of donating a hydrogen ion in solution, forming a spice called hydronium (H3O+), while the base is a species capable of accepting these ions.

However, not all acids donate their protons to the same extent, strong acids are those that donate almost all of their protons in water, the non-differentiated part of which is negligible. It is called weak acid when this dissociation does not occur completely, which is why these acids have an associated Ka (constant that measures the ionization capacity of an acid). All of this happens similarly for the grassroots.

These constants are applied for weak acids and bases, and are given mathematically as follows; HA being a weak acid:

Equilibrium constant for an acid – Own authorship

In the case of bases, this is similarly the case, with RNH2 being a weak base in an aqueous medium:

sub>balance constant for a base – Own authorship

Experimentally determined constants that allow the corresponding calculations to be made in the solutions and/or acid-base reactions.

The molar concentration of H3O+ in an aqueous solution is usually very small. Consequently, and for convenience, H3O+ is usually expressed in terms of pH, which is the negative logarithm of base 10 of the concentration of the same. There is also a scale called pOH, where the minus logarithm is calculated on the basis of 10 at the OH- concentration. In a solution the sum of pOH and pH should be 14.

Expression for pH and pOH – Own authorship

Calculating its pH at 25°C gives a pH=7, which is considered on the scale as a neutral value.

There are some solutions called buffers, or buffer solutions which are made up of a weak acid or base and its corresponding salt. These solutions have the characteristic of being able to regulate pH and resist pH changes when small amounts of a strong acid or base are added.

Another way to express the acidic force or basic force can be done using pKb or pKa, which are constants that represent the least logarithm of a Ka or Kb constant for a specific compound.

Thus, the pH of a buffer solution could be calculated using the Henderson-Hasselbalch equation. Which is very useful but cannot be used with very diluted solutions because the approximations that are made would represent a big mistake.

In order to limit the pH of a solution, it is convenient to use an acid-base indicator, which are weak acids or organized bases of complex structure. Its main characteristic is that its ionized and non-ionized forms present different colors.

Then you can determine with them if any solution is acidic or basic. The indicators also have an associated constant.

Equilibrium Acid – Base of a pH indicator – Own authorship

Each of them has a turning range in which the colors of both its basic and acidic form are mixed creating an intermediate color, and allowing the pH to be limited in this range. Otherwise, if this intermediate color does not occur, you need to add another appropriate indicator so that you can estimate an interval.

Calculation of the pH of the solutions to be used:

Using the above equations and properties, the theoretical pH of the solutions used in this practice is calculated.

Initially, the pH corresponding to hydrochloric acid (HCl) solutions with different concentrations will be required. 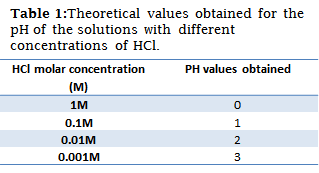 The pH of the 5ml acetic buffer/sodium acetate solutions of 0.1M/0.1M concentrations after addition of 5ml of each of the above HCl solutions is also warranted. 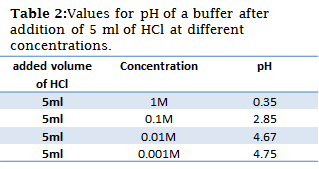 For the following practices it is important to know the pH of some salts, acids and bases of concentration 0.1 M in aqueous medium. 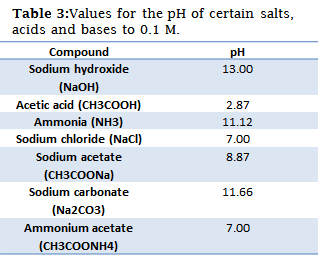 The following acid-base indicators were used to carry out the above experiments. 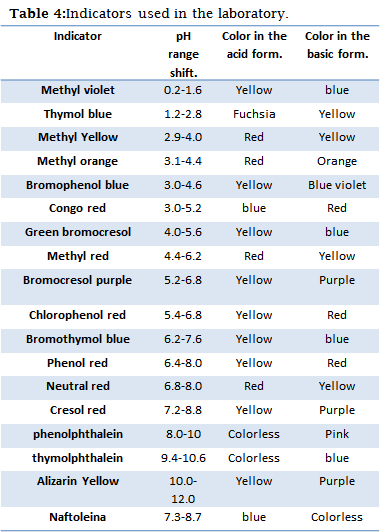 Below are some experiments that can be carried out in the laboratory, with the aim of experimentally verifying the theoretical aspects that have been described.

The pH solutions of HCl concentrations 1M, 0.1M, 0.01M and 0.001M were initially measured with the indicator paper by adding a small drop of the solution to it. The pH was then limited by using the appropriate indicators for this purpose, and two indicator tests were used for each solution.

After the pH measurements were made using both the indicator paper technique and the liquid indicators, the acidity of each of the samples was tested experimentally. 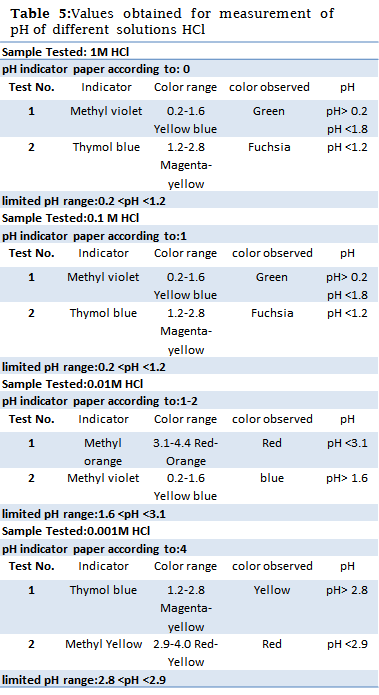 It is evident that the indicator paper always gives an inaccurate result, with a turning interval of one unit, however, each pH was limited with the acid-base indicators. In the case of the 1M HCl solution, the value was greater than 0.2, which contradicts the theoretical calculations, it is necessary to highlight that this may happen due to some error in the preparation of the solution, or regarding the indicator, however 0.2 is a value very close to 0. It happened in a similar way in the 0.001M HCl solution, in which theoretically the pH is 3, however, the level was not exact, but it was quite close, the same errors are attributed to it. In the other two solutions (HCl 0.1 and 0.01 M) the level was satisfactory.

5ml of each of the 4 HCl solutions obtained in experience 1 was added to 4 test tubes, 5ml of acetic acid/sodium acetate buffer solution of 0.1M/0.1M concentrations (pH buffer=4.76) was added to each tube. The pH of the 4 solutions obtained was measured using indicator paper and indicator dimensioning. The same Procedure was performed to estimate the pH of the buffer and the buffer.

In the following experience, the effectiveness of a buffer solution in the face of the disturbance caused by the addition of several concentrations of a strong acid, HCl, was tested. 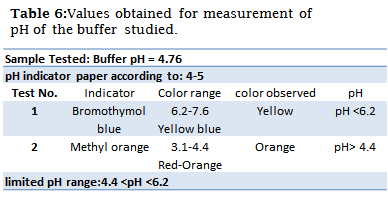 The buffer studied was of a pH = 4.76, this value was verified, however, the indicator paper was not sufficient to ensure this, the dimensions by means of the indicators, again affirmed the veracity of the pH calculated theoretically, both techniques together were satisfactory. 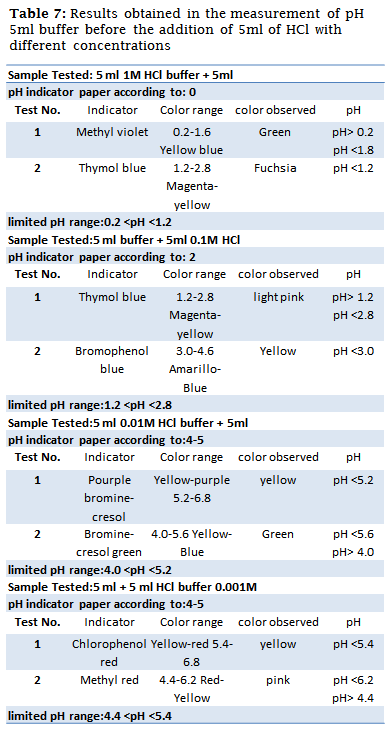 The results obtained are consistent with the theoretical calculations made previously, once again the indicator paper was a tool that limited the pH in whole numbers, but in most cases these ranges were confirmed and/or reduced with the use of the indicators. An exception to this is the result of the indicator paper in sample 1, which suggested a pH=0, the indicators turned out to be more accurate making this value a more acceptable range (0.2<pH<1.2).

The pH was determined using the above method (measurement by indicator paper and dimensioning with acid-base indicators) 0.1M solutions of different compounds (acids, bases and salts).

The following practice demonstrated the acidity or basicity of some salts, as well as the pH of acids and bases (strong and weak). The values obtained using the same method are shown below. 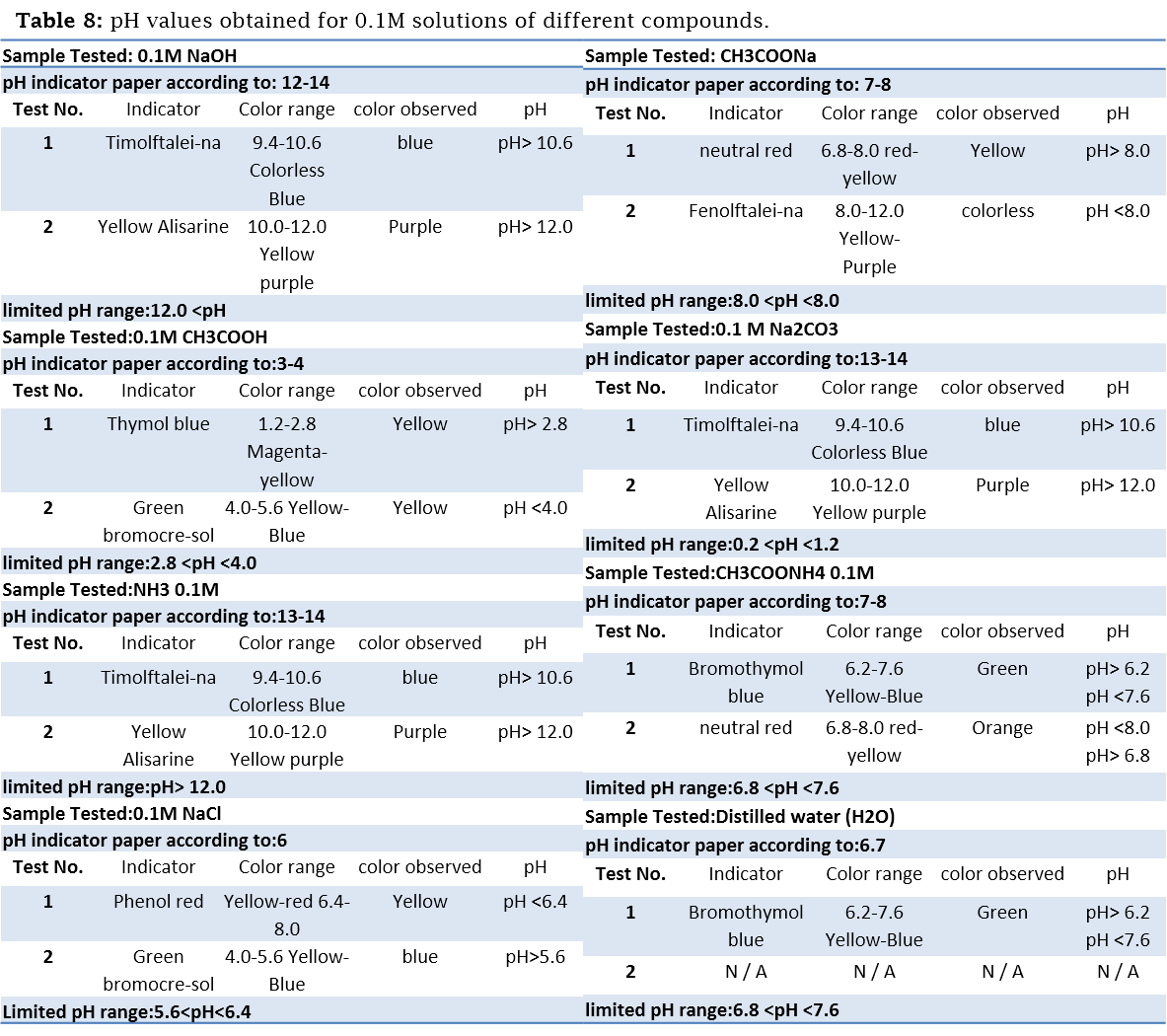 Some Results were not similar to the theoretical values obtained previously, ammonia (NH4) turned out to be (according to the yellow alizarine indicator) a solution with a pH higher than 12, however, theoretically it should not reach this value; the sodium chloride (NaCl) solution implied a rather acidic pH, which is not characteristic of this solution (it should have a pH=7). In the case of water only one indicator was used because adding other indicators the result was totally inconsistent with the result obtained with bromothymol blue, and with the theoretical calculations, for this reason it was decided to use only that one, which was also consistent with the result of the indicator paper.

One of the best results was that of sodium acetate (CH3COONa) which was limited in an interval of (8.0;8.0), this means that the real pH value is very close to 8, this result, although it was quite precise, was not exact, since the theoretical value is 8.87. With respect to the other compounds, the result was quite close to the real one and both the indicator paper and the liquid indicators satisfy the pH value of each of them. However, it is important to mention that a Source of error in this assessment could be the same chemical indicators in conjunction with the perception of the color of the human eye.

After comparing the pH estimated by the indicator paper and certain indicators, it can be said that the indicator paper alone will always give a pH range greater than one (depending on the scale of the manufacturing company). Then, with the use of one or two indicators, this value could easily be limited to a remarkably narrow range, so, together, these two tools are quite reliable.

The buffer solution available in the laboratory was able to considerably buffer the pH of the most diluted acid solutions, which highlights their importance to nature.

In the case of salts, it was remarkable the different pH values that can be obtained in an accusative medium, products of the hydrolysis capacity of some of its ions, some of them quite acidic and others basic.

In general, some errors may have occurred from the preparation of the solutions (systematic or random error), which could affect the concentration of the species and therefore the pH. Some indicators may also have had faults associated with their preparation; it is also worth noting the human error corresponding to their perception of colours, since in some cases this can become very ambiguous and not very objective.

In general, the practice showed the fundamental notions about pH and the compounds that may or may not affect it, as well as analytical and effective techniques for its measurement. 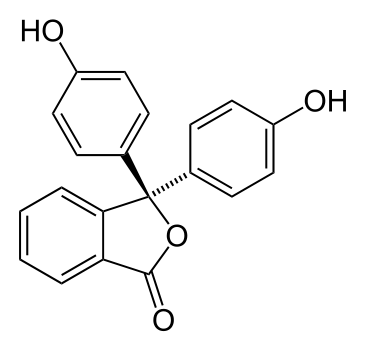 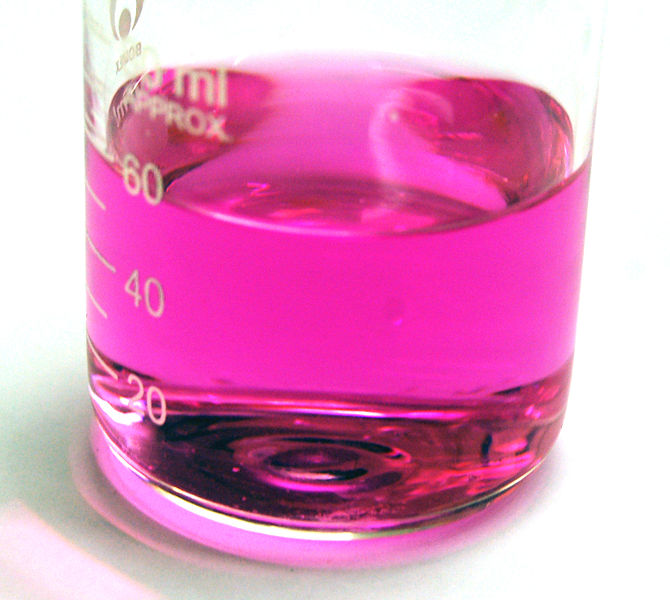 When this basic solution comes into contact with the blood and after the hydrogen peroxide has been rosed, a chemical reaction occurs in which hydrogen peroxide is reduced by the hemoglobin molecule (present in the red colored red blood cells), which uses the electrons of the reduced phenolphthalein to carry out this process (phenolphthalein oxidation). When all this occurs in the basic medium, the phenolphthalein after being oxidized immediately carries the purple color to the solution, giving a positive result to the presence of blood in the sample. This test is called the Kastle-Meyer Test. 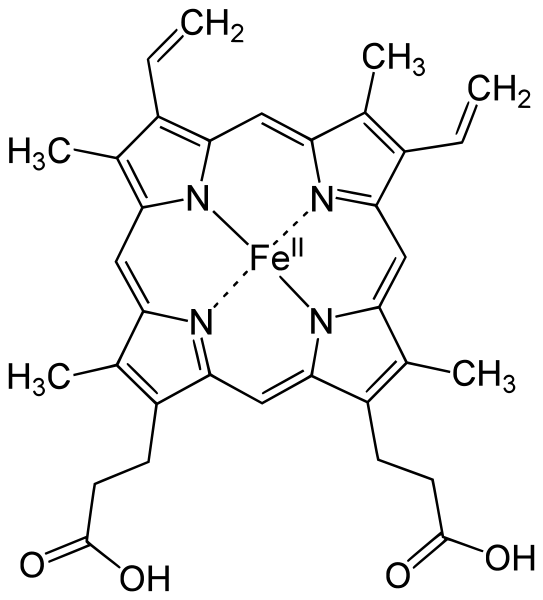 I hope that this article has been to your liking, I personally consider this type of phenomena, one of the most impressive and interesting. It is important to know more and more about the world around us and the manifestations of it that, to a great extent, will surprise us.

Thank you for reading.

All the images of my authorship were edited and processed using the software PowerPoint 2016.

Do you know what ANTIMATTER is?

Evaluating the reactivity of metals: Prediction of redox reactions with metallic species and cations.